Ingredients and dosage strengths of BCAA injection include: 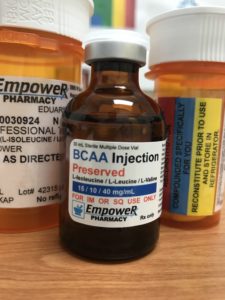 BCAA Injection General Information: There are nine essential amino acids which are not made by the body and therefore must be obtained via the diet.

3 of the 9 essential amino acids are:

These are called branched-chain amino acids (BCAAs) because their molecular structure is branched.

While all other amino acids are broken down in the liver; BCAAs are metabolized primarily in lean body mass tissue.1 Because of this, they could help improve exercise performance and also reduce the rate of lean body mass break down.2

BCAA supplementation may promote lean body mass protein synthesis and also increase lean body mass in individuals who consume a low protein diet.3 In one study, leucine and valine were found to cause a significant suppression in body weight loss in mice with cachexia (body-wasting). Both of these BCAAs caused a significant increase in muscle tissue, through an increase in protein synthesis and a decrease in degradation.4

L-Isoleucine: Isoleucine is the BCAA best known for its role in increasing endurance, helping to repair lean tissue, and encouraging blood clotting at the site of injury. This BCAA has been shown to provide potential benefit for athletes because its primary role in the body is to increase energy and help recovery from strenuous physical activity.7

An isoleucine deficiency can produce symptoms like those of hypoglycemia (low blood sugar), and can include:8

Leucine is also an effective BCAA for preventing lean body mass loss because it is metabolized to glucose more quickly than either isoleucine or valine. Increased available glucose inhibits the body having to break down lean body mass for energy during intense exertion.

Leucine is also involved in healing processes in bones, skin, and lean body mass tissue after traumatic injury. Because of this leucine is often administered in nutritional support for people recovering from surgery.9

What are the precautions when taking this medicine? According to the most recent research studies; daily intake of BCAAs substantially in excess of the BCAAs contained in dietary sources appears to be safe in humans.11 Excessive oral consumption can cause gastrointestinal discomfort.

Who shouldn’t take this supplement? People who suffer from Maple Sugar Urine Disease (a rare but potentially fatal metabolic disorder) lack an essential enzyme to break down BCAAs and should not use BCAA injection.12

Consuming BCAAs has been linked to lung failure and increased death rates when used in people with ALS (Lou Gehrig’s Disease). If you have ALS, you should not use branched-chain amino acids.13

What are some possible side effects of this medicine? A recent study hasn’t found any side effects associated with taking the recommended dose of BCAAs.14

How is it best taken?  BCAAs can be taken either orally or by intramuscular injection.

What do I do if I miss a dose?  If you do miss a dose; it is best to take it as soon as you remember. But, if it is almost time for the next dose, simply skip the missed one and take the next scheduled dose. Don’t take two doses at the same time.

How should I store this medicine? Store BCAA Injection at between 68°F to 77°F (20°C to 25°C) and keep it away from heat, moisture, and light. Keep all medicines out of the reach of children. Throw away any unused medicine after the beyond use date. Do not flush unused medications or pour down a sink or drain.

COST?  $200 for a 30ml vial with all supplies for injections. This will give you 30 total injections.